Our restaurant is planned to open in April.
Reserve your next stay now on our official website and enjoy our best online rates coupled with flexible terms of cancellation.

While staying at Le Pont de l’Ouysse, there is a plethora of stunning places to discover! Throughout the Dordogne Valley, from the Lot to the Dordogne and Corrèze regions, experience all of the riches of a unique cultural and natural heritage. Here is our selection. 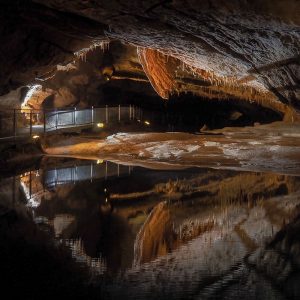 The Caves of Lacave

First port of call, the Caves of Lacave : Les Grottes de Lacave. Less famous than the Gouffre de Padirac, this journey to the center of the Earth is equally mesmerizing. The caves are only 8 minutes on foot from Le Pont de l’Ouysse. ! 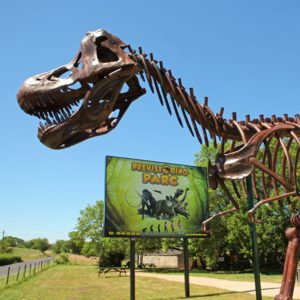 Three km further, get up close and personal to some life-size dinosaurs at Prehisto-Dino Park and do not miss a tour of the Grotte des Carbonnières, only recently opened to the public. 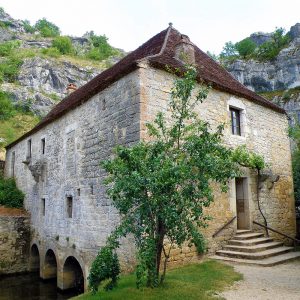 There are so many remarkable buildings and historic monuments in the area, it is hard to know where to begin… Very close to Le Pont de l’Ouysse, Le Moulin de Cougnaguet is a must. Built by monks in the 13th century on the banks of the Ouysse river, the fortified mill still works today for visitors. 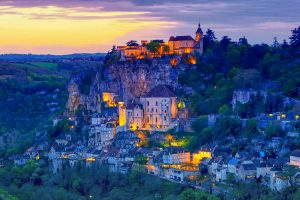 It takes 15 minutes by car via the scenic route to reach the medieval city and pilgrimage site of Rocamadour. Hanging on a vertical cliff, the thousand year old city in an architectural treasure on the Way of Saint James to Compostella. 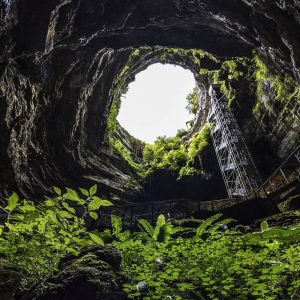 The Chasm of Padirac

Slightly further afield, the Gouffre de Padirac is the biggest chasm in Europe. An incredible journey 103m underground, by foot and on board a boat on a crystal-clear subterranean river.. 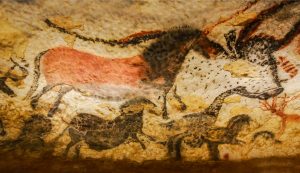 Lascaux IV is the new and complete replica of the world-famous prehistoric caves of Lascaux. Home to renowned 20 000 year old Paleolithic art and situated in the Dordogne department, we recommend you book in advance. Tours in English are available. En route, you might want to visit the abbey-church Sainte-Marie in Souillac, a remarkable 12th century building with a byzantine-style roof. 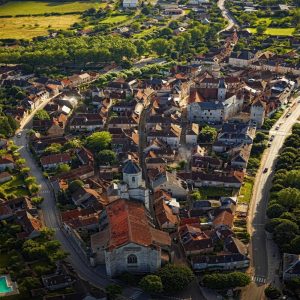 25 minutes from le Pont de l’Ouysse, the city of Martel is well worth the detour. Named the “Town of Seven Towers”, it was an important merchant city in the Middle-Ages. Its importance was revived again in the 19th century with the truffle trade. Do not miss the spectacular journey on board the steam train Truffadou to discover wonderful panoramas over the Dordogne Valley. 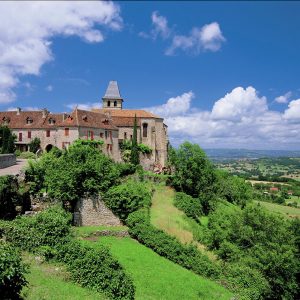 35 minutes from Le Pont de l’Ouysse, Loubressac is labelled as one of the « Most Beautiful Villages in France ». It dominates the landscape over three valleys and the mighty fortified castle of Castelnau-Bretenoux. Close by, the village of Carennac with a 12th century church and cloister, is another unmissable medieval gem. 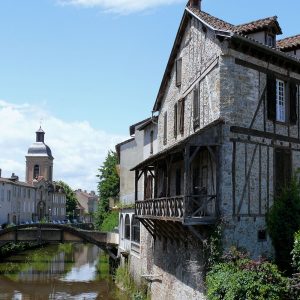 10 minutes further, you will reach the lively town of Saint-Céré with many shops and medieval buildings. Do not miss the Château de Montal while you are there. The only Renaissance castle of the Dordogne Valley, it was built by a woman with a tragic destiny. 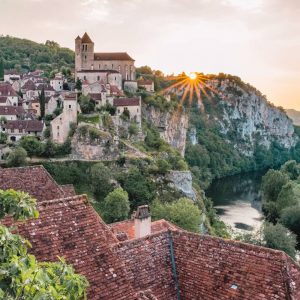 Going South towards Cahors, Saint-Cirq-Lapopie is a picture-perfect village overlooking the Lot River. Also labelled as one of the “Most Beautiful Villages in France”, a steep climb leads through narrow medieval streets with artist’s shops and historic buildings. 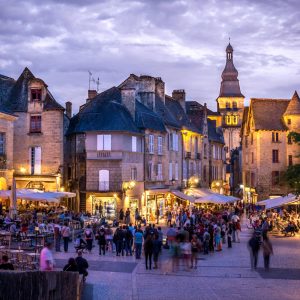 Lastly but by no means least, Sarlat in the Périgord Noir is famous across the world for its unparalleled historical, architectural and cultural heritage. 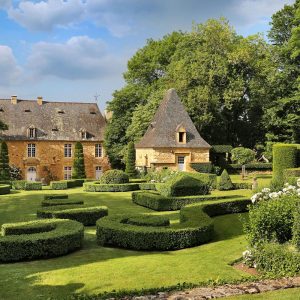 Close by, gardens lovers and topiary art amateurs are in for a treat at the Jardins du Manoir d’Eyrignac and the Jardins de Marqueyssac overlooking the Dordogne River.

Canoeing on the Dordogne River

From Beaulieu to Souillac, the Dordogne gently winds through 60 km of unspoilt nature and incredible scenery with wild pebble beaches, sandy shores and dramatic cliffs at every bend.

Our ancestors made the most of this unique landscape by building castles and medieval villages along the river. Gently paddling down the Dordogne is the best way to enjoy the wilderness, biodiversity and heritage of the river. Available from 6 years old and knowing how to swim is mandatory.

Situated on the banks of the Dordogne, a fun day-out for the whole family with seven pools, slides, bouncy castles, games and tree-climbing.

For sports enthusiasts, the region offers a wide range of outdoor activities such as cycling, mountain biking, hiking, fly-fishing, canoeing…Golf amateurs have a choice of two golf courses: The Souillac Golf and Country Club in Lachapelle-Auzac and the Golf de Montal in Saint-Jean-Lespinasse.

Leisure activities, with or without children, are as fun as they are diverse.

At the monkey park La Forêt des Singes in Rocamadour, get up close to (and even feed by hand) a Barbary Macaque monkey, 150 of which roam free in the oak forest. 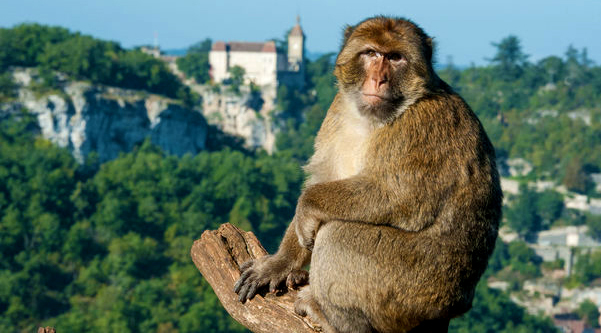 At the eco-park Le Rocher des Aigles, watch eagles, condors, vultures and falcons fly above the canyon in Rocamadour.

In Souillac, discover the largest collection of 19th century automata and mechanical toys in Europe at the Musée de l’Automate. 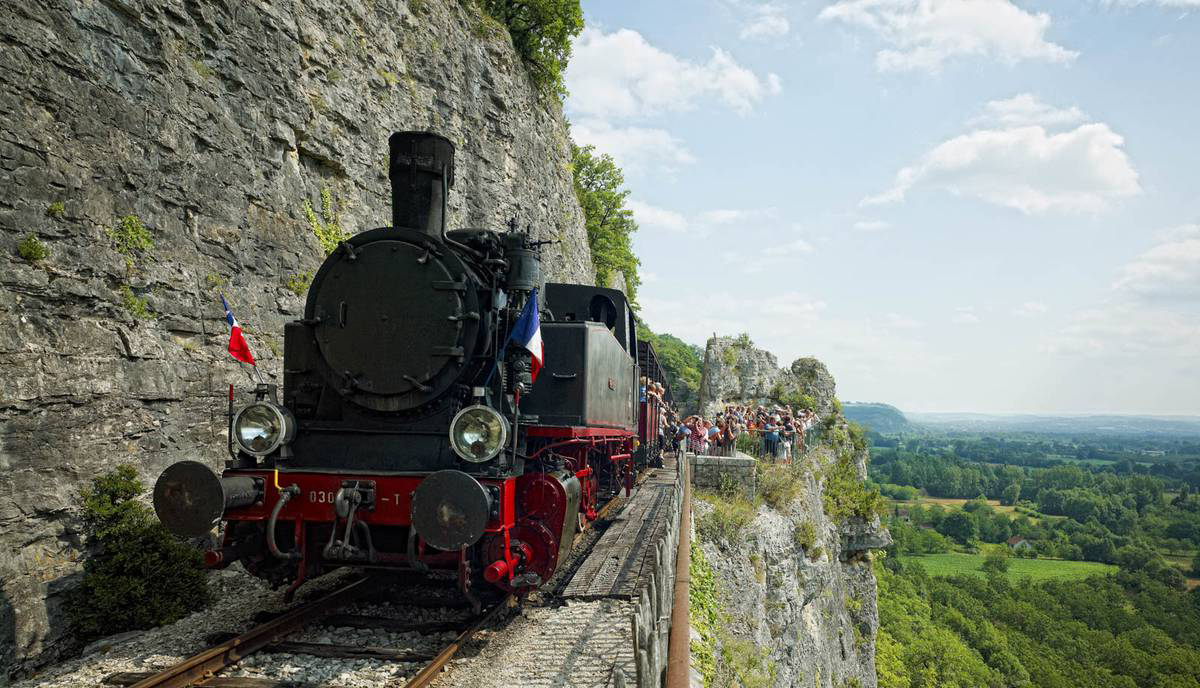 In Martel, embark on a voyage aboard a steam train and enjoy a 13 km journey on a cliff 80m above the Dordogne Valley.

At La Ferme de la Truffe, you will have the opportunity to visit a real truffle farm while learning about the art of truffle hunting. A 1.5 hour stroll between the oak and hazelnut trees to understand the history of the prized “black diamond”. 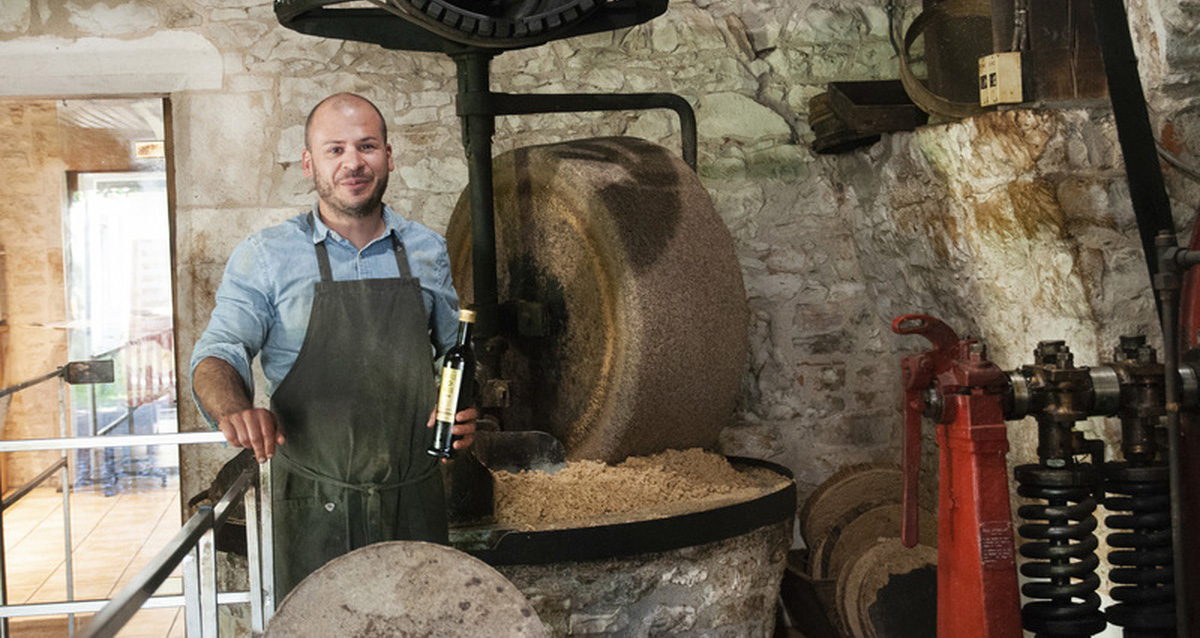 The Moulin Castagné is a working mill where you can learn about the production of walnuts and making of walnut oil. Free tasting at the end of the tour.

La Borie d’Imbert welcomes you to free tours of the farm in order to learn about cheese making while getting close to the farm animals, including baby goats. The Rocamadour goats cheese has been a local specialty since the 15th century.

If you enjoy wine, then you should really head to the Vignoble de Cahors, world famous for the emblematic Malbec grape variety. The wineries of Cahors are spread over 4200 hectares mainly in the Lot Valley. Many of the wineries are open to the public for tasting some exquisite wines directly from the passionate wine makers.

Finally, if you head North to the Corrèze region, you should pay a culinary visit to the Bistrot Chambon Chambon in Brive, our sister restaurant.